Free Shipping on all Orders above  3500 Rs.  for Limited Time Only 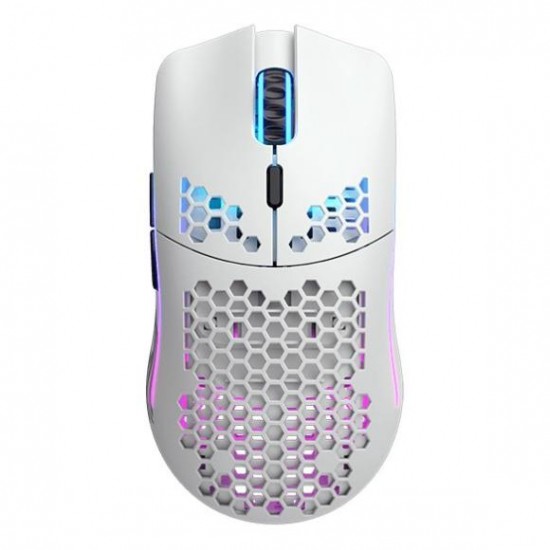 Glorious Model O Wireless Ultra-Lightweight Gaming Mouse Matte White
This is Model O the world’s lightest RGB gaming mouse. Envisioned by a community of passionate gamers, and developed by a team who accepts nothing less than perfection – Model O will elevate your play to unimaginable heights.

As you would expect from Glorious PC Gaming Race, the Model O Wireless is uncompromising in its performance and design. The challenge with Wireless gaming mice is to ensure that they remain just as responsive as their wired counterparts. Glorious have achieve this by developing their own BAMF sensors. These sensors have a low power draw but still allow for 400 IPS tracking, up to a 19,000 programmable DPI and even a polling rate of 1000hz.

The next most important feature for a wireless is gaming mouse is battery life. No one wants a successful run cut off by their mouse suddenly dieing. Glorious have addressed this problem by offering a play time up to 71 hours (with the RGB turned off). And there is even the option to charge the Model O Wireless while gaming, simple connect the flexible USB-C Ascend charging cord.

Of course there are some distinct advantages to using a wireless gaming mouse, the main one being flexibility in where you place the mouse. The Model O Wireless can be up to 5 metres from your PC. Such distance is possible thanks to a fast 2.4GHz lag-free wireless technology.

Glorious PC Gaming Race have taken considerable effort to ensure that the Model O Wireless both looks outstanding and meets the expectations of demanding gamers.

It retains many of the same design elements as the previous wired version. For instance it has the same distinct Honeycomb pattern on the surface to helps users maintain a strong grip. Naturally it is also suitable for ambidextrous use.

Also the clean lines of the Model O Wireless are enhanced by RGB LEDs running across its edges. It is possible easily control illumination effects through dedicated software. In fact up to 16.8 million colours can be generated by the Model O Wireless’s LEDs

Another great feature of the Model O Wireless is its maneuverability, which is augmented by the G-Skate mouse feet. These ensure smooth gliding across a variety of surface types.